The Fighters Generation has a bunch of concept art & screenshots posted from the upcoming DLC for Tekken Tag Tournament 2. Here’s some of it:

Apparently Japan is getting an E-Book service for the 3DS according to an article on Nintendo Everything. It will be called Bookstore Everywhere and is scheduled for release sometime in late October. Initially only manga titles will be available for 400 – 500 yen. Additional content is planned to come out later on.

If you picked up Kirby’s Dream Collection, you may have noticed this part of the instruction manual, which seems to hint at more Kirby games coming to the 3DS Virtual Console: 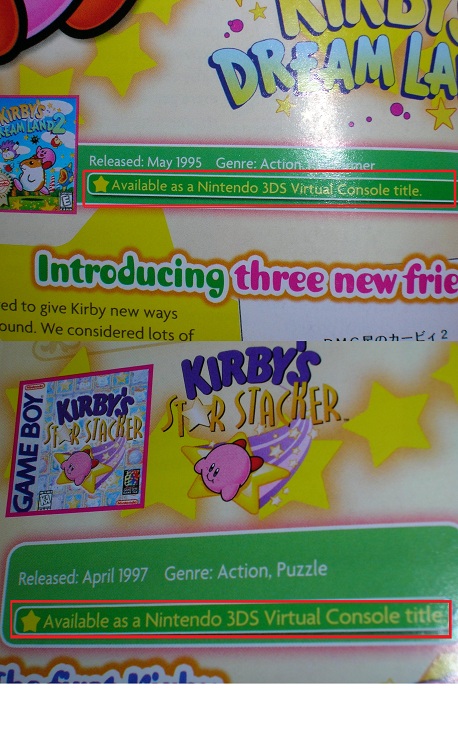 “As many of us have seen in recent years, Nintendo is a company that deals a good line in fan service. Nintendo has produced everything from the recent abundance of anniversary titles, collector’s books, cards, and pretty much anything else in the hope that fans can supplement their game collections and help celebrate their favorite characters.

One new addition to the Japanese Club Nintendo original goods, called Club Nintendo Picross, is essentially nothing but pure fan service. For a mere 80 Club Nintendo points, members can purchase a code that they can use on the 3DS eShop, which will then download to their 3DS consoles just like a normal download title.”

Here’s part of another Nintendo Life review, this time for Rising Board 3D:

“The endless runner craze isn’t about to end any time soon, and that’s understandable. The genre offers an experience that is both suited to quick play sessions and unique every time you boot it up. The DSiWare service even received a rough equivalent in I Must Run!, and now the eShop has Rising Board 3D, an endless surfer.”

“Slowly but surely, Teyon is on its way towards a half-way decent entry in its Heavy Fire series of military pop shooters. After squeezing out two downloadable disasters and an inexplicable retail release, Teyon returns to the well with Heavy Fire: Special Operations 3D — a reloaded version of that first WiiWare gem, now with added eye-popping dizzles and much-welcome tweaks. It’s still not all that remarkable, but it’s possibly the most fundamentally sound entry so far.”

The popular fantasy action franchise Monster Hunter™ returns to Europe and North America with Monster Hunter 3 Ultimate launching on Nintendo Wii U™ and Nintendo 3DS™.
Players take on the role of a hunter and are sent to explore a settlement within the Monster Hunter™ universe, completing quests on their journey to seek and slay monsters while improving their skills and earning equipment upgrades. With many challenging monsters and over 200 quests the latest edition to the series is set to be the most expansive offering to date.

Monster Hunter™ 3 Ultimate utilizes the functionalities of the Wii U console and Nintendo 3DS system to provide players with a truly intuitive hunting experience. The
touch screen feature of both platforms allows players to quickly access in-game books, weapons, field maps and mini games while the high quality graphics of Wii U and 3D
visuals of Nintendo 3DS powered by the latest iteration of Capcom’s MT Framework deliver a unique and stunning world for players to explore. Taking advantage of the
portability of Nintendo 3DS, players can exchange their guild card that contains all their hunter’s information with other players via StreetPass™.

Players can experience the world of Monster Hunter™ alone or in four player local play using Nintendo 3DS. Finding nearby hunters to adventure on quests with is now even easier via the local Nintendo 3DS search feature. Wii U players will be able to enjoy the hunt with Nintendo 3DS players via a local wireless connection. Gamers that
own both a Wii U and Nintendo 3DS can take advantage of the inter compatibility of save data between the two consoles, taking the hunt from the living room wherever they go.

Expansive Monster Hunter world – equipment and weapon upgrades, challenging monsters and over 200 quests to tackle make this latest offering the most expansive in the series so far

Utilize the Wii U and 3DS functionalities – The touch screen feature of both platforms provides easy access to in-game books, weapons, field maps and mini games

High quality HD resolution and 3D visuals – The beautiful world of Monster Hunter, powered by Capcom’s latest iteration of the MT Framework, appears visually stunning and unique for players to enjoy on both Wii U and 3DS format

Don’t hunt on your lonesome – Connect with up to three friends in four player local play via the Nintendo 3DS or online via the Wii U. Wii U players can also link up with Nintendo 3DS players over a local connection

Search for fellow hunters! – Use the local 3DS search feature to find other hunters in your location

Take the experience with you wherever you go – Share your save data between your Wii U home console and the Nintendo 3DS, allowing the Monster Hunter experience to be truly portable

Meet your companions – Never feel alone in the vast world of Monster Hunter with the aid of your two companions, Cha-Cha and Kayamba, who will assist you on your quests

Injustice: Gods Among Us debuts as a bold new fighting game franchise that introduces a deep, original story featuring a large cast of favorite DC Comics icons such as Batman, Cyborg, Harley Quinn, Nightwing, Solomon Grundy, Superman, The Flash, Wonder Woman and many others. Set in a world where the lines between good and evil are blurred, players will experience heroes and villains engaging in epic battles on a massive scale.”

“FIFA Soccer 13 is the most innovative, feature-rich, and authentic 3D soccer experience on Nintendo 3DS. Become a true marksman using optional touch screen controls. Pick a spot precisely from the player’s viewpoint using the lower touch screen and then direct a shot with pinpoint accuracy. Choose to compete as a real-world superstar from over 500 officially licensed clubs or re-create yourself in the 3D Street Soccer Mode. FIFA Soccer 13 features eight different game modes, including authentic 11 versus 11, head-to-head local wireless play using Nintendo® Wi-Fi Connection, Be A Pro, Tournament Mode with over 50 real-world competitions, and a full in-depth Career Mode.”

“Today is a great day for Nigoro and EnjoyUp, La-Mulana will be available on WiiWare after so many years of wait.

EnjoyUp wishes thank Nigoro to trust us, and Nintendo for his support. And above all, to all fans around the world who has sent us messages of happiness to be able to finally enjoy La-Mulana on the Nintendo Wii.”
LA-MULANA

Are you ready to survive all types of traps and discover all the secrets of LA-MULANA?

LA-MULANA is the most complete “archaeology action and exploration” game ever created.

Take control of Professor Lemeza and his inseparable whip to discover the mysteries of Humanity! Face all types of traps, enemies and Guardians in the greatest adventure every created for WiiWare.

In LA-MULANA you will explore vast temples and, most importantly, you will have the feeling of total immersion.

Each mechanism, trap or puzzle you solve will be a great achievement.

– The best “archaeology action and exploration” game.
– Over 40 hours of play.
– Hundreds of puzzles and secrets to be discovered.
– Wide variety of weapons and objects you can use.
– Use the “Mobile Super X” computer to run help software.
– Large quantity of enemies with spectacular guardians.”

Nintendo eShop
THE “DENPA” MEN: They Came By Wave (demo version) – Mysterious little creatures called “Denpa” Men float around near radio waves. You can’t see them normally, but you can find them and catch them in this dungeon RPG for Nintendo 3DS. (For Nintendo 3DS™ / Nintendo 3DS™ XL)

Last Chance to Get Pokédex™ 3D – If you haven’t downloaded Pokédex 3D to your Nintendo 3DS system yet, time is running out. The free application, which lets you see each Pokémon™ in 3D with animated motion and sound, will be available in the Nintendo eShop only until Oct. 1, 2012. (For Nintendo 3DS / Nintendo 3DS XL)

WiiWare™
LA-MULANA – LA-MULANA is the most complete “archaeology action and exploration” game ever created. Take control of Professor Lemeza and his whip to discover the mysteries of Humanity. (For Wii™)

Nintendo Video™
Meat or Die: Naomi – Your favorite dim-witted dinosaurs are back on the search for meat! This time, when Yans is tempted to go vegetarian, Gans snaps him out of it and refocuses their attention on their next big prize: Naomi. (For Nintendo 3DS / Nintendo 3DS XL)

GoNintendo has posted some impressions from the Mario Chase attraction of Nintendo Land. Here’s a partial look at those impressions:

“Mario Chase could very well be the simplest game in the entire Nintendo Land collection. It’s basically a game of tag…that’s it. While it may sound like a bare-bones experience, I also believe Mario Chase is one of the most fun experiences in Nintendo Land. I haven’t found a Nintendo Land attraction that I don’t enjoy, but Mario Chase’s easy gameplay and addictive nature make it very hard to put down.

As I said, Mario Chase is a very simple game to play. Up to 4 players take on the roles of characters that are trying to capture Mario. The Mario player is playing on the GamePad. The 4 TV players have to run around the map and find Mario. The GamePad player has to keep away from the 4 chasers and run down the time limit to zero. That’s really all there is to it!”

Check out the link below for more of their impressions.

So far, none of the Level-5 games shown at this year’s Tokyo Game Show are scheduled for a North American or European release according to a post on Kotaku. Though personally I wouldn’t be shocked to see Professor Layton VS Ace Attorney and Professor Layton and the Azran Legacies coming out in North America.