You’ve finally arrived at a new town by train. Due to a slight misunderstanding, you wind up becoming town mayor! Living here you take care of flowers, catch bugs, and catch fish while interacting with the animals of the village; you play your way.

The town progresses in real time; in the morning the animals start waking up with you. At night you can see the stars starting to come out. Depending on the season, the look and feel of your town changes as well. You can also enjoy special events during the different seasons.”
For more of the translation, check out the article on GoNintendo, linked below. 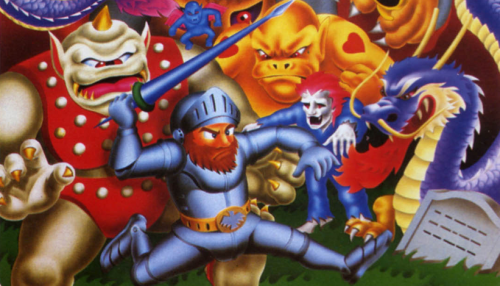 The NES classic from Capcom, Ghosts ‘N Goblins is scheduled to release next week, on 10/25/12 for the 3DS eShop. The game is notoriously famous for it’s high degree of difficultly, even with the Stage Select code. I also personally enjoyed the music from the game and it’s a great choice for spooky Halloween music. No info on the price for this version, but here’s the full announcement from Capcom:

“Just in time for Halloween, the NES version of Ghosts ‘n Goblins arrives on the 3DS eShop to torment poor Arthur all over again. This ’80s classic is rated E for ‘Mild Fantasy Violence,’ though IMO the ESRB should consider adding descriptors for ‘Soul Crushing Difficulty‘ and ‘Not Responsible When You Snap the 3DS In Half.’

This is actually the second Capcom game I played, ever (the first being 1942). First saw it in a fine Kentucky lodge arcade, then realized a friend had the same game on NES months later. Designed as a quarter muncher, GnG really tests your skill and demands precise play from beginning to end. However, I always felt the game did so much with so little, creating an oppressive, unwelcome mood that made you feel like the journey was truly impossible. But with enough perseverance (or like $50 in quarters) you could win the day.

In a follow-up from our recent rumor regarding Nintendo characters possibly appearing Scribblenauts Unlimited, Warner Bros Interactive Entertainment (WB Games) has confirmed there will indeed be Mario & Zelda characters in the game. So far it appears that the following characters will be in the game in some form:

Warner Bros. Interactive Entertainment Announces Scribblenauts Unlimited to Include Iconic Nintendo Characters From the Mario and Legend of Zelda Franchises

More creativity, more fun, and now more characters and objects on the Wii U!

Warner Bros. Interactive Entertainment announces that its highly anticipated Scribblenauts Unlimited game will feature even more than ever before, with Nintendo themed bonus content. Players can summon dozens of their favorite characters and items from the Mario and Legend of Zelda franchises exclusively in the Wii U version of the game.

Scribblenauts Unlimited expands upon the best-selling, award-most popular action video games franchise that challenges players to imagine anything and bring it to life in the game. This latest Scribblenauts installment will feature a huge side-scrolling open world with new, high-definition hand-drawn scenery and objects where players can help Maxwell solve robust puzzles and challenges by creating any object they can imagine.

Microsoft has announced an expansion pack for the upcoming racing game Forza Horizon. The expansion is called Forza Horizon Rally and will be released on 12/18/12 for 1,600 Microsoft Points. Here’s part of the announcement:
“With just a few more days until the launch of Forza Horizon starting on October 23, the news for the game keeps coming strong. As if hitting the open roads of Colorado wasn’t enough, today we’re unveiling the first glimpse of the first expansion pack for Forza Horizon… and rally fans, this one’s for you. The “Forza Horizon Rally Expansion Pack” is coming on December 18 to Xbox LIVE and will be available for 1,600 MS Points (or included as part of the Forza Horizon Season Pass). Delivering an immersive and authentic rally racing experience on the roughest untamed roads of Colorado, the “Forza Horizon Rally Expansion Pack” will offer Horizon players an outstanding off-road racing experience with deeper ruts, higher jumps, and new surface types to explore. Players will experience authentic rally action behind the wheel of rally-tuned cars, complete with co-driver calls, and much more. Look for further details on the “Forza Horizon Rally Expansion Pack” in the coming weeks, leading up to the release of the pack on December 18.”
For a whole lot more details, check out the link below.