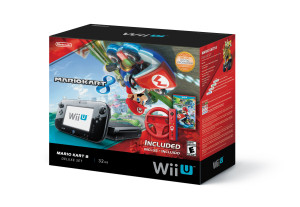 Nintendo recently held a Nintendo Direct presentation focusing on the upcoming anticipated Wii U racing title, Mario Kart 8. You can check out the full video above. One new announcement made during the event was that Nintendo will be bringing the Mario Kart 8/Wii U Bundle to North America. Previously it was only announced for European markets. The bundle comes with the game, a Wii U Deluxe (Black) console, a red Mario-themed Wii Wheel, and a red Mario-themed Wii Remote Plus controller. The MSRP for the bundle is set at $329.99. Also announced was a free game offer for purchasing Mario Kart 8. All you have to do is buy the game and register it on Club Nintendo before July 31st and Nintendo will send you a free download code for a select eShop title on Wii U. Games that are being offered as part of this deal are: New Super Mario Bros. U, Pikmin 3, The Legend of Zelda: The Wind Waker HD, and Wii Party U. Europeans are getting the same offer, with those games as well as: Nintendo Land, Game & Wario, Sonic Lost World, Mario & Sonic at the Sochi 2014 Olympic Winter Games, The Wonderful 101, & Monster Hunter 3 Ultimate. You are eligible for the deal whether you buy the game at retail, on the eShop, or as part of the Wii U bundle.

Mario Kart 8 will also feature online multiplayer with up to 12 players racing together in 4 modes of multiplayer. Mario Kart 8 will support the use of the Wii U GamePad’s built-in microphone so you can trash talk or chat in the lobby before your race. You’ll also be able to use various text phrases. Tournaments will be an option in the game as well, with both private & public options being available. You get to pick the day, time, & rules. Ghost data will once again make an appearance in Mario Kart 8 so you challenge your friends or the worldwide top 10 players.  Stamps will be offered as well if you manage to beat the times of the development team’s ghosts. Players will also be able to record & watch highlight reels of their races, rewind them, and upload them to Miiverse, as was previously announced. If you have a Google account, you can also upload your videos directly to YouTube.

Nintendo finally revealed details on the 2 previously unknown items we mentioned about a month ago. They’re called the Super Horn and the Crazy Eight. The Super Horn will finally give players a defense against the dread Blue Spiny Shell which can be a game-changer for those who are in 1st place. The Super Horn will use a sonic blast to blow away any items nearby including Red Shells and the deadly Blue Spiny Shell. The Super Horn can also blow away other racers who are nearby. As rumored, the 8 symbol item is very similar to Mario Kart 7′s Lucky Seven item. It’s called the  Crazy Eight and it will give you a rotating swirl of 8 different items that you get to use one at a time.

New items aren’t the only new additions announced as Nintendo also announced a few new playable characters. The first is Pink Gold Peach, who you can see in the concept art above. She serves as sort of a counterpart to Metal Mario and marks the first metal version of Peach playable in any Mario-series game. Another character making her debut in Mario Kart 8, is Baby Rosalina, the baby version of Rosalina who was the princess/ruler in Super Mario Galaxy. This marks the first baby version of her as well as the first playable baby version of her. She is also show in the concept art above (along with Baby Mario & Baby Luigi). Miis have also been announced as returning as playable characters, after first appearing in Mario Kart Wii. This means thus far, that there will be 30 playable characters, not counting any hidden ones or ones that may not be announced before release.