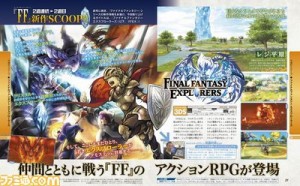 Famitsu has published an article in their latest issue which contains a lot of details about Final Fantasy Explorers. Some of the playable jobs (classes) in the game: Paladin, Ninja, Thief, Bard, Dragon Knight, Red Mage, & Time Mage. You can have up to 8 abilities assigned to each button for battle purposes. Famitsu referred to the game as being a scaled down version of Final Fantasy XIV/Final Fantasy XI and thus the position of your characters will have some importance. You’ll be able to chain abilities from one job to another after mastering that ability. The costs for an ability will be reduced if the character has the same job type as the ability type is, thus for example a Black Mage would have reduced costs for black magic. The game’s setting is an island and you’ll be able to walk to other lands. You can also become friends with monsters after defeating them. This appears like it will be somewhat similar to Pokémon and it will include some type of monster training. The monsters you become friends with will be able to be used as playable characters. The estimated length of the game is between 100-200 hours. Square Enix is hoping to turn it into a spin-off series. Final Fantasy Explorers will support local & online co-op multiplayer.