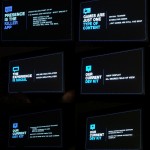 After months of rumors and speculation, Sony has finally lifted the lid on their take on virtual reality with Project Morpheus, a virtual reality headset for the PlayStation 4. The accessory was revealed during Sony’s panel at GDC as had been previously speculated. The current prototype model for Project Morpheus is full HD 1080p and features a 90 degree field of view according to Shuhei Yoshida, President of Sony’s Worldwide Studios for Sony Computer Entertainment Inc. The headset will also feature accelerometer & gyroscope sensors along with a version of the PlayStation Camera.  These will be used in coordination to track head movements, orientation, & rotation of the user. This unit will also come with a new feature from Sony which is 3D audio that will (according to Sony) “re-create[s] stereoscopic sounds in all directions and changes in real-time depending on your head orientation.” User input will be handled through use of the DUALSHOCK 4 controller and PlayStation Move controller. Yoshida-san stated that they will be sending this prototype out to developers as a dev kit as well. The headset will be on hand at Sony’s booth at GDC this week showing off various tech demos.