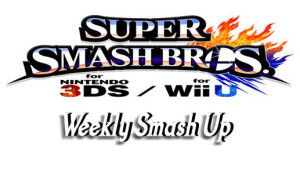 It’s time once again for the Weekly Smash Up, our weekly feature where we review the Super Smash Bros. For Nintendo 3DS & Wii U screenshots that Masahiro Sakurai has posted on Miiverse for the past week. For the week of June 23rd, we start off a screen showing Rosalina facing off with some sort of fairy looking person. According to posters on Miiverse, this is apparently a stage based on Pac-Land, a platformer version of Pac-Man from 1984.

Our next screenshot shows us Link in an outfit similar to the one from Skyward Sword that he wears before obtaining his traditional green tunic. He is taking aim at someone or something with his trusty bow & arrow.

Next up we get a different version of the Balloon Fight screen from a while back. This time it is showing characters quite similar to the appearance in the original NES game, albeit in modern polygonal form. Sakurai wrote in his post that it will be playable with four players. It appears this may be limited to the 3DS version as the screenshot was marked 3DS. It also looks like it will use the retro style graphics for  the stage with modern ones for the characters. This is pretty awesome in my opinion. The music in the original game was awesome and the game itself was pretty fun as well.

We then move on to a screen showing off Nabbit, with Kirby in hot pursuit. This is on the Mushroom Kingdom U screen. Sakurai-san tells us that Luigi is Nabbit’s bag even though we can’t see the green clad hero. It appears that the purple bandit will be a stage hazard for this level.

Finally, in today’s screenshot, we wrap up the week with a look at Mario & a couple of Mii Fighters. According to Sakurai, when you assign different traits to your Mii, these can be brought to the Mii Fighter playable character. So for example, a big Mii will become a powerful fighter, while a smaller one will be a quick fighter.