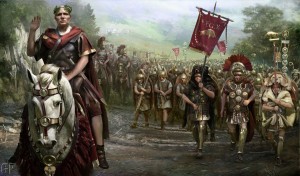 Caesar in Gaul is the first campaign expansion for ROME II, and brings Caesar’s Gallic war to life in thrilling detail. Offering a tighter scope in terms of time and geography than ROME II, the Caesar in Gaul campaign map offers an expanded, more detailed vision of Gaul and the south coast of Britannia.

Players can choose from four playable factions in this conflict: the Gallic Arverni, the Germanic Suebi, the Belgic Nervii and Rome; in a campaign inspired by Caesar’s Commentarii de bello Gallico (Commentaries on the Gallic war).

“We’ve released a number of DLC packs and free content updates for ROME II, but this is our most substantial so far”, said Mike Simpson, Creative Director of the Total War series. “We’ve always planned to focus more closely on some of the key conflicts of the ancient world, and Caesar’s war in Gaul is the ideal place to start.
“We’ve also improved the game considerably since launch, and that process continues as we move onto substantial feature and gameplay improvements”.
Further information can be found here: http://download-store.sega.com/eshop/total-war/rome-2-3418.html

Caesar in Gaul brings a number of new features to ROME II:

New campaign map: The expanded map of Gaul and southern Britannia brings 18 provinces to conquer, fully detailed with resources, settlements, capitals, and new environmental effects.
Greater focus on characters: Play through the campaign with faction-leading avatars such as Caesar and Vercingetorix.
24 turns per year & seasons: A shorter campaign timespan (58-51BC) means each in-game year is split into more turns. As the calendar changes, so do the seasons, bringing seasonal gameplay effects and stunning visual alterations.
New mid-game challenge mechanics:Caesar in Gaul replaces ROME II’s civil war with different, conflict-appropriate mechanics. As barbarian players progress, they’ll begin to feel the mailed fist of Rome as heavy intervention forces are sent to Gaul. Likewise, Roman players will see the tribes rebelling and forming alliances.
Compact, focused multiplayer campaign: With a tighter geographic scope and faction-roster, 2-player campaigns are more focused and less time-consuming than the full ROME II campaign.
New historical battle: Surrounded and outnumbered, take on the role of Caesar as he fights the last desperate, decisive engagement of the Gallic War: the battle of Alesia.
New Total War: ROME II playable factions: Alongside the factions playable in Caesar in Gaul, several playable factions are also unlocked in the full ROME II campaign: the Nervii, the Boii and the Galatians.
New units: A raft of new battlefield units is unlocked for the Boii, the Galatians, the Nervii and the Gallic tribes, plus new auxiliary and mercenary units.