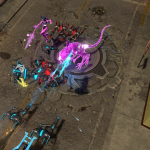 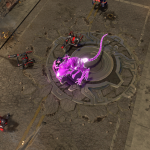 Champion of love, Star Sapphire will be the newest Champion to join Infinite Crisis, the upcoming free-to-play MOBA from Turbine based in the DC Universe! Get an inside look at this lovely champion before she’s added to the in-game line-up on February 26.

Carol Ferris hired Hal Jordan to be a test pilot at Ferris Aircraft and the two stumbled into romance. It grew more complicated when an alien tribe called Zamarons granted Carol the Star Sapphire ring, able to channel the profound power of love. At first, this power distorted Carol’s feelings into hatefulness and the two fought often. In due time she was able to master the ring, even acting as keeper for the Predator entity, love’s sentient manifestation.

Star Sapphire’s blast range and damage keep her opponents dancing at a distance.